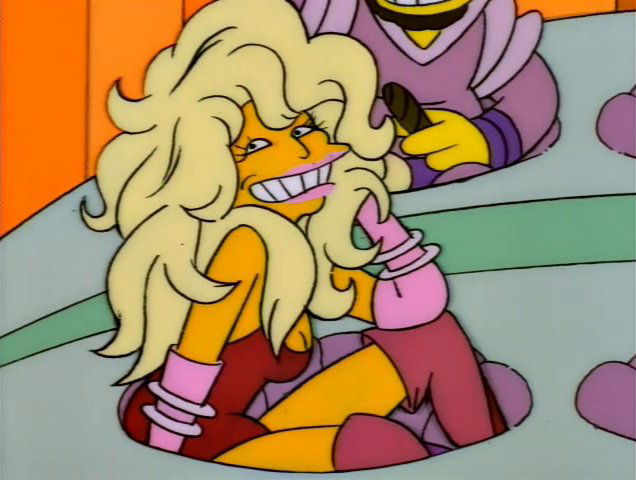 Over the past four decades, the The Simpsons television program has made thousands of incorrect predictions about the future, ranging from Arnold Schwarzenegger becoming president, Disney’s acquisition of romance, and the seizure of the East Coast by a supervillain.

So it frankly wasn’t all that surprising when a human-eyed viewer on Digg shared yet another bungled prediction to add to the pile: the late Farrah Fawcett still being alive in the year 2034.

In the 1994 episode “Bart Gets Famous,” Bart Simpson becomes a famous celebrity. Worried that his fame is fleeting, he imagines a future in which he appears on the game show Match Game 2034 alongside other has-been celebrities, including Billy Crystal, Loni Anderson, Spike Lee, the head of Kitty Carlisle, and Farrah Fawcett.

Sadly, Fawcett would not live to see the year 2034, as the Charlie’s Angels star would tragically pass away from a rare type of cancer on June 25, 2009. Compounding the tragedy, she is introduced in Bart’s fantasy as “Farrah Fawcett-Majors-O’Neal-Varney,” implying that she would eventually marry actor Jim Varney, best known for playing the character Ernest P. Worrell. Varney passed away himself in the year 2000.

Nobody expects a cartoon to get everything right, particularly one as frequently wrong as The Simpsons. However, one can’t help but wonder if this tragedy could’ve been avoided if Fawcett had been the one whose head was preserved in a jar. Perhaps Fawcett would’ve seen the episode, become more aware of her mortality, and the cancer could’ve been detected earlier. The Simpsons would still be wrong, but at least we’d still have one more Angel here on Earth.

Previous: Woo-Hoo! Disney+ Will Finally Show The Simpsons The Way It Was Meant To Be Seen
Next: Here’s Everything We Know About the Next Simpsons Movie