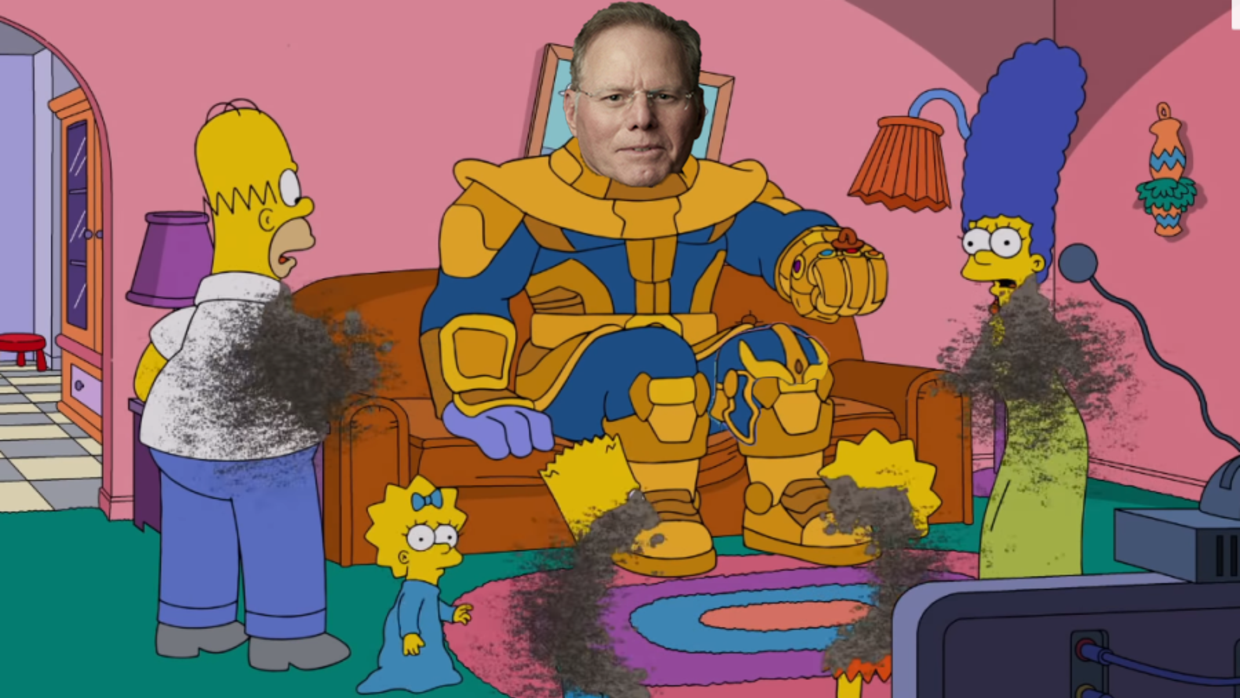 The Fox Network has renewed the popular television cartoon The Simpsons for yet another two seasons, ensuring audiences nationwide will still be entertained during the final months of the republic and beyond.

From the press release:

Emmy Award-winning Animation Domination kingpin THE SIMPSONS has been renewed for its 33rd and 34th seasons on FOX, carrying the series to 2023 and a total of 757 episodes. ¡Ay, caramba!

As the United States enters its death throes under the Biden regime, new episodes of The Simpsons will provide a sense of stability as our beloved homeland collapses, assuming of course that television will continue to broadcast.

This is the first renewal since Disney’s acquisition of the company formerly known as 20th Century Fox (Fox, the channel, is still owned by the Murdochs). Some had speculated the show might move to producing new episodes exclusively for Disney+, where it’s consistently one of the service’s most popular shows. In the linear world, however, ratings continue to dwindle, and The Hollywood Reporter called it a loss leader for the network. Nevertheless, fans can rest assured that the comedic antics of Homer, Bart and the other Simpsons will continue to provide a fun diversion from the corpses piling up outside.

There’s a big change in store for next season of The Simpsons: nothing but Vladimir Putin jokes! Ukranian and Russian media outlets have obtained an EXCLUSIVE preview clip, and it looks like all future jokes will be replaced with zingers at the Russian president’s expense.

This simple online video has been picked up by a number of outlets in the region. One major Ukrainian television channel picked it up, though one of Ukraine’s largest Web sites noted that it hadn’t been able to confirm its authenticity yet. The Post reached out to Fox Television, which said that this clip had been doctored. No, Bart Simpson did not call Putin a “huylo,” and no, there is no Crimea billboard in Springfield.

Creator Matt Groening, who has Russian ancestry, is believed to be the mastermind behind the switch. No word yet on how Western audiences will react to the show’s newfound focus on Eastern European politics. END_OF_DOCUMENT_TOKEN_TO_BE_REPLACED

*spins around in chair to face reader* Oh, hello! I just got off the telegraph with a trusted, completely anonymous tipster, who resides at 271 Orange Grove Ave. in Burbank, CA, who has once again risked life and limb to bring us more EXCLUSIVE Simpsons tidbits that the shiftless layabouts at Entertainment Weekly still haven’t gotten their grubby meathooks on yet. Below, please find enclosed four exclusive, never-before-seen episode synopsi, reprinted in their entirety…

END_OF_DOCUMENT_TOKEN_TO_BE_REPLACED

It seems a crafty teen tipster has managed to get ahold of a TOP-SECRET memo outlining the plotlines for the upcoming world-record 24th season of The Simpsons, purloined directly from the writers’ room at FOX Studios! We’ve got the full memo after the jump.

END_OF_DOCUMENT_TOKEN_TO_BE_REPLACED

IN THE NEWS is happy to report that comedian and former Simpsons writer Dana Gould is not a murderer.

Here’s the deal: a while ago I learned from Wikipedia that Gould had used the pseudonym “Lawrence Talbot” for a Simpsons episode he’d written, Goo Goo Gai Pan, wherein the Simpsons go to China to help Aunt Selma adopt a baby. Curious about this intriguing bit of trivia, I decided to ask him about it in what I hoped was a friendly, professional e-mail:

Alas, a few weeks passed and there was no response from Mr. Gould. Naturally, I assumed he was attempting to dodge the question because he was hiding something nefarious, hoping the scandal would blow over before it even started. Well, I wasn’t going to give up so easily. Undaunted, I e-mailed him again a couple times, but each time I was rebuffed with his stonewalling silence. That’s when things got personal. How dare this Hollywood Liberal refuse to answer questions from the press! How could he so callously disregard my joke Simpsons fansite as anything less than legitimate? But I didn’t let my emotions compromise my professional integrity, no sir. I knew that as a member of the vaunted Fourth Estate, my responsibility was to shake out The Truth by any means necessary. So, I decided to take the upper hand in this escalating cat-and-mouse game between reporter and subject. and play a little hardball. Utilizing a journalism strategy I learned from an imaginary book, I took the story public and spread some venomous allegations about Mr. Gould, speculating perhaps he had “murdered a teenage girl” or “shot up an entire orphanage” and was hiding behind a phony name to escape culpability for his crimes. In short, I hoped to force his hand and get him to respond. Here’s the original post about it, as I reported at the time.

END_OF_DOCUMENT_TOKEN_TO_BE_REPLACED

True Simpsons maniacs know that the show’s reclusive creator, Matt Groening, hasn’t been a part of the show since 1999, when he retreated to a yurt in central Oregon and cut off all ties with the outside world in a self-imposed exile. Well, apparently the Groenster has returned to the show, and he’s been making some MAJOR, DRASTIC CHANGES that will be hitting your TV screens in 2012.

I just received this e-mail from an anonymous Simpsons employee, literally less than 4 seconds ago. This brave insider has put his or her career on the line by breaking the terms of his or her non-disclosure agreement to tell us this EXCLUSIVE tale of behind-the-scenes turbulence and tyranny. I am republishing hir message in its entirety because it has to be seen to be believed…

END_OF_DOCUMENT_TOKEN_TO_BE_REPLACED

The Twittersphere was in a tizzy today when a series of Tweets from @BARTSIMSON_REAL appeared to indicate the popular Twitter account had been compromised.

For those who don’t know, @BARTSIMSON_REAL aka “BART SIMSON YUGOSLAV” is the official Twitter account for Bart Simpson, who is real and Yugoslavian. Launched less than a month ago, the account has already gained over 3,000 followers and a writeup in the mainstream media (I’m also hearing rumors a book deal may be in the works). His Tweets have captivated the world and regularly burn up the retweet charts. A sampling of his output, for the uninitiated…