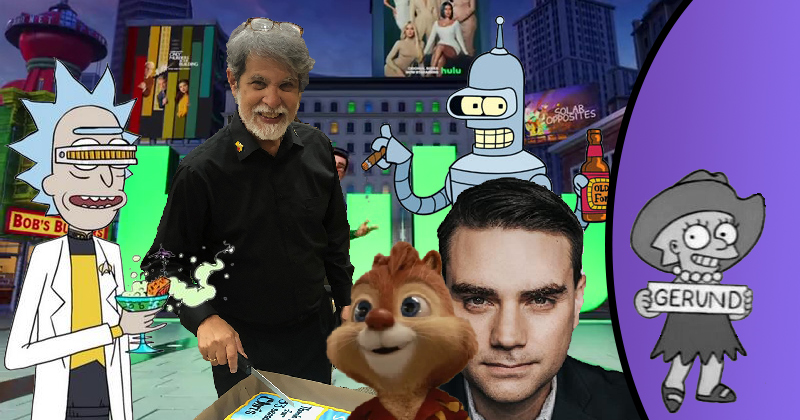 In the opening moments of the latest episode of Star Trek: Prodigy, the characters experiment with transporting a piece of pie throughout the USS Protostar, leading Jason Mantzoukas’s character Jankom Pog to remark “Mmm, floor pie,” a clear reference to a classic Simpsons moment (also, a clear ADR line). The Simpsons, of course, has made hundreds if not thousands of references to Star Trek over the decades, but as far as I know (which is admittedly very little, as I’m not a big Trek fan and am mostly just cribbing from Memory Alpha) this is the first time the latter franchise has reciprocated. Which made me start to wonder: does The Simpsons exist in the Star Trek universe?

Just to be clear, there is zero possibility Jankom Pog was consciously quoting an Earth TV show that theoretically would’ve premiered nearly four centuries prior to his birth, especially considering the first human he’s ever seen is a hologram of Captain Janeway. That doesn’t necessarily mean the show didn’t exist. If it did, though, it raises all sorts of questions:

Was the team at Gracie Films still cranking out classics like “Kamp Krusty” as the Eugenics Wars ravaged the globe? Did The Simpsons serve as a form of escapism for audiences in the relatively unaffected United States? Would vacation episodes still be as common with much of the world controlled by genetically engineered despots? Were people quoting their favorite Homer lines as they attempted to flee The Augments? Would it still be possible for Bill Oakley to write the “Steamed Hams” segment, knowing full well that 35 million people were being killed in a massive international conflict? Was production halted at the South Korean animation studio Akom when Khan Noonien Singh conquered Asia, or did he allow them to continue? Was he, perhaps, a fan of the show? What about Marla McGivers, the Enterprise’s historian from the 1967 episode “Space Seed” – does her 1990s expertise include Bartmania? If the show did exist, would it still be considered an exemplary work of art by surviving TV critics? Would it still be revered as such in the age of the Federation? Could the Holodeck feature a Simpsons program alongside programs based on Sherlock Holmes and Jane Eyre?

Given that Star Trek and The Simpsons are owned by separate media conglomerates, it is unlikely that we will ever receive an official, canonical answer. But’s it’s certainly something to think about.