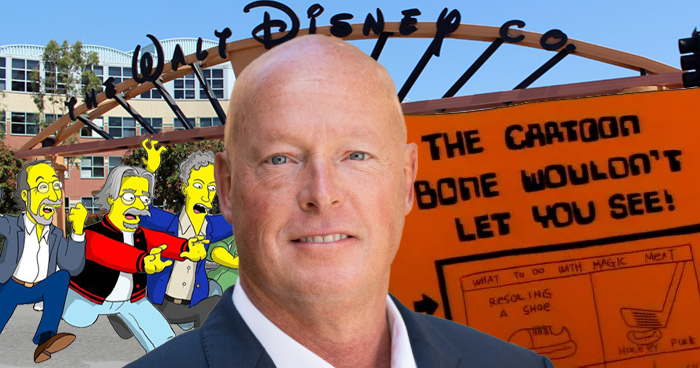 It is unclear at this point whether Chapek, 61, can execute a reset with Disney staff and creative partners. A cartoon hanging in the production offices of The Simpsons seems to suggest an opinion: It has Chapek in the “In Memoriam” section of the Oscars show.

First of all, what a fuckin’ lame cartoon. Second of all, who cares. Some comedy writers made light of authority, stop the presses.

Well, apparently the Simpsons TOP BRASS care, because the article was updated later in the day to include this parenthetical disclaimer:

(The Simpsons top brass, including Jim Brooks, Matt Groening, Al Jean and Matt Selman, deny that that there was such a cartoon in the office. “For the sake of the simple truth: No notice concerning Bob Chapek has been on the walls of any Simpson’s office. Since March 2020 all our work has been done remotely due to Covid. Nobody has been in the offices for two years now. We do miss the snack room,” they wrote in a joint statement. The source who spoke with THR said that the circulated cartoon was in fact subsequently taken down.)

That FOUR executive producers felt the need to issue a joint statement about this stupid doodle that may or may not have actually existed is bewildering and pathetic. Do they think they’re going to get sent to the principal’s office? Maybe they’re right and they’re just really concerned about the spread of Fake News. In that case, why not just have one guy deny it, why did they need all four? Was this really an “all hands on deck” scenario? Also, I guess maybe there’s a world of difference between “production office” and “studio,” because this doesn’t look like somebody’s home to me.

Whatever happened, their emphatic denial makes them sound like they’re absolutely terrified of their boss’s wrath, which seems very silly because The Simpsons was once known for biting the hand that feeds them (albeit with the hand’s permission) and other parts of the company haven’t exactly been shy expressing criticism of their leadership lately.

Who knows, maybe years from now we’ll read in DisneyWar 3 about how this absolutely set Chapek off and made him angrily tear up the plans for Simpsons Land at EPCOT or whatever.

END_OF_DOCUMENT_TOKEN_TO_BE_REPLACED

.@thesimpsons #EverySimpsonsEver I personally am v sorry to see DVDs discontinued We did them purely for the love of hearing ourselves talk

@theRealiHeart Simpsons fans are great (which is why we will do commentaries anything else we can). DVD market is dying. Did best we could.

END_OF_DOCUMENT_TOKEN_TO_BE_REPLACED

Simpsons writer/producer Marc Wilmore announced his departure from the show in a strange series of tweets.

Previously a writer/performer on In Loving Color and The PJs, Wilmore joined The Simpsons in 2000. He was the sole black writer to have been part of the show’s writing staff (Michael Carrington, who co-wrote “Homer’s Triple Bypass” and voiced Sideshow Raheem, wasn’t technically part of the staff).

On Thursday and Friday, he tweeted self-deprecating jokes about his newfound unemployment and suggestions the parting was less than amicable. It’s most certainly all part of a comedy bit, but… what if it wasn’t…?!?

END_OF_DOCUMENT_TOKEN_TO_BE_REPLACED

The creator of The Simpsons shows off his sweet dance moves, the crew dashes the hopes of Comic-Con attendees, Homer chokes, Bob from Bob’s Burgers flies, and a showrunner becomes a lawbreaker.